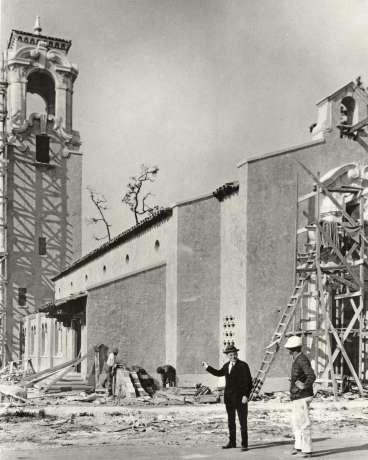 Our church’s denomination, the United Church of Christ (UCC), not only has a rich and profound history, but also a dynamic and vibrant ministry and mission today. The UCC has about 1.1 million members nationwide in over 5,200 congregations. The UCC is a church of many “firsts.” We were the first mainline church to take a stand against slavery (1700), the first to ordain an African American person (1785), the first to ordain a woman (1853), the first in foreign missions (1810), and the first to ordain openly gay lesbian, bisexual, and transgendered persons (1972). We value education for all people. We founded Harvard and Yale, as well as many historically black colleges, six of which remain affiliated with the UCC to this day.

Our local church was founded in 1923 and is the oldest established building and organization in Coral Gables. George Merrick, the architect and developer of Coral Gables, was the son of a Congregational Minister. To honor his father, he built this church, which has continued to be both a historic site and a significant force in this community. Known for its inspiring worship, outstanding music and arts program, a premier Early Childhood Center, and a bold and prophetic outreach program, the church is a place of solace, sanctuary, and spiritual growth for thousands of people every year.